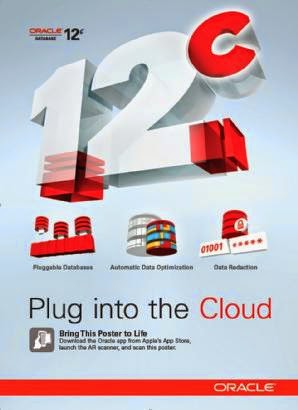 Advanced Index Compression works well on all supported indexes, including those indexes that are not good candidates for the existing prefix compression feature; including indexes with no, or few, duplicate values in the leading columns of the index.

The new and optimized SQL function, APPROX_COUNT_DISTINCT(), provides approximate count distinct aggregation. Processing of large volumes of data is significantly faster than the exact aggregation, especially for data sets with a large number of distinct values, with negligible deviation from the exact result.

The need to count distinct values is a common operation in today's data analysis. Optimizing the processing time and resource consumption by orders of magnitude while providing almost exact results speeds up any existing processing and enables new levels of analytical insight.

Attribute clustering is a table-level directive that clusters data in close physical proximity based on the content of certain columns. This directive applies to any kind of direct path operation, such as a bulk insert or a move operation.

Storing data that logically belongs together in close physical proximity can greatly reduce the amount of data to be processed and can lead to better compression ratios.

This big table cache provides significant performance improvements for full table scans on tables that do not fit entirely into the buffer cache.

Customers can now use Flashback Data Archive in databases that they are consolidating using Oracle Multitenant, providing the benefits of easy history tracking to applications using pluggable databases (PDB) in a multitenant container database.

Caching the entire database provides significant performance benefits, especially for workloads that were previously limited by I/O throughput or response time. More specifically, this feature improves the performance of full table scans by forcing all tables to be cached. This is a change from the default behavior in which larger tables are not kept in the buffer cache for full table scans.

In-Memory Aggregation optimizes queries that join dimension tables to fact tables and aggregate data (for example, star queries) using CPU and memory efficient KEY VECTOR and VECTOR GROUP BY aggregation operations. These operations may be automatically chosen by the SQL optimizer based on cost estimates.


In-Memory Aggregation improves performance of star queries and reduces CPU usage, providing faster and more consistent query performance and supporting a larger number of concurrent users. As compared to alternative SQL execution plans, performance improvements are significant. Greater improvements are seen in queries that include more dimensions and aggregate more rows from the fact table. In-Memory Aggregation eliminates the need for summary tables in most cases, thus simplifying maintenance of the star schema and allowing access to real-time data.

In-Memory Column Store enables objects (tables or partitions) to be stored in memory in a columnar format. The columnar format enables scans, joins and aggregates to perform much faster than the traditional on-disk formats for analytical style queries. The in-memory columnar format does not replace the on-disk or buffer cache format, but is an additional, transaction-consistent copy of the object. Because the column store has been seamlessly integrated into the database, applications can use this feature transparently without any changes. A DBA simply has to allocate memory to In-Memory Column Store. The optimizer is aware of In-Memory Column Store, so whenever a query accesses objects that reside in the column store and would benefit from its columnar format, they are sent there directly. The improved performance also allows more ad-hoc analytic queries to be run directly on the real-time transaction data without impacting the existing workload.

The last few years have witnessed a surge in the concept of in-memory database objects to achieve improved query response times. In-Memory Column Store allows seamless integration of in-memory objects into an existing environment without having to change any application code. By allocating memory to In-Memory Column Store, you can instantly improve the performance of their existing analytic workload and enable interactive ad-hoc data extrapolation.

This feature adds support for storing, querying and indexing JavaScript Object Notation (JSON) data to Oracle Database and allows the database to enforce that JSON stored in the Oracle Database conforms to the JSON rules. This feature also allows JSON data to be queried using a PATH based notation and adds new operators that allow JSON PATH based queries to be integrated into SQL operations.

Companies are adopting JSON as a way of storing unstructured and semi-structured data. As the volume of JSON data increases, it becomes necessary to be able to store and query this data in a way that provides similar levels of security, reliability and availability as are provided for relational data. This feature allows information represented as JSON data to be treated inside the Oracle database.

The new database parameter, DBFIPS_140, provides the ability to turn on and off the Federal Information Processing Standards (FIPS) 140 cryptographic processing mode inside the Oracle database.

Use of FIPS 140 validated cryptographic modules are increasingly required by government agencies and other industries around the world. Customers who have FIPS 140 requirements can turn on the DBFIPS_140 parameter.

The CONTAINERS clause is a new way of looking at multitenant container databases (CDBs). With this clause, data can be aggregated from a single identical table or view across many pluggable databases (PDBs) from the root container. The CONTAINERS clause accepts a table or view name as an input parameter that is expected to exist in all PDBs in that container. Data from a single PDB or a set of PDBs can be included with the use of CON_ID in the WHERE clause. For example:SELECT ename FROM CONTAINERS(scott.emp) WHERE CON_ID IN (45, 49);

This feature enables an innovative way to aggregate user-created data in a multitenant container database. Reports that require aggregation of data across many regions or other attributes can leverage the CONTAINERS clause and get data from one single place.

The new parameter, CREATE_FILE_DEST, allows administrators to set a default location for Oracle Managed Files (OMF) data files in the pluggable database (PDB). When not set, the PDB inherits the value from the root container.

If a file system directory is specified as the default location, then the directory must already exist; Oracle does not create it. The directory must have appropriate permissions that allow Oracle to create files in it. Oracle generates unique names for the files. A file created in this manner is an Oracle-managed file.

The CREATE_FILE_DEST parameter allows administrators to structure the PDB files independently of the multitenant container database (CDB) file destination. This feature helps administrators to plug or to unplug databases from one container to another in a shared storage environment.

If a PDB LOGGING clause is not specified in the CREATE PLUGGABLE DATABASE statement, the logging attribute of the PDB defaults to LOGGING.

This new clause improves the manageability of PDBs in a multitenant container database (CDB).

An administrator can now create a clone of a pluggable database only with the data model definition. The dictionary data in the source is copied as is but all user-created table and index data from the source is discarded.

This feature further improves rapid provisioning of pluggable databases. Administrators can spend less time on provisioning and focus more on other innovative operations.

With the initialization parameter CLONEDB set to true, snapshot clones of a pluggable database are supported on any local, Network File Storage (NFS) or clustered file systems with Oracle Direct NFS (dNFS) enabled. The source of the clone must remain read-only while the target needs to be on a file system that supports sparseness.

The SAVE STATE clause and DISCARD STATE clause are now available with the ALTER PLUGGABLE DATABASE SQL statement to preserve the open mode of a pluggable database (PDB) across multitenant container database (CDB) restarts.

These new SQL clauses provide the flexibility to choose the automatic startup of application PDBs when a CDB undergoes a restart. This feature enhances granular control and effectively reduces downtime of an application in planned or unplanned outages.

The USER_TABLESPACES clause allows a user to specify which tablespaces need to be available in the new pluggable database (PDB). An example of the application of this clause is a case where a customer is migrating from a non-multitenant container database (CDB) where schema-based consolidation was used to separate data belonging to multiple tenants to a CDB where data belonging to each tenant is kept in a separate PDB. The USER_TABLESPACES clause helps to create one PDB for each schema in the non-CDB.

Rapid Home Provisioning allows deploying of Oracle homes based on gold images stored in a catalog of pre-created homes.

Provisioning time for Oracle Database is significantly improved through centralized management while the updating of homes is simplified to linkage. Oracle snapshot technology is used internally to further improve the sharing of homes across clusters and to reduce storage space.

For full table access, zone maps allow I/O pruning of data based on the physical location of the data on disk, acting like an anti-index.

Accessing only the relevant data optimizes the I/O necessary to satisfy a query, increasing the performance significantly and reducing the resource consumption.

Popular posts from this blog

Oracle Database 18c was available on Oracle Cloud. Now everybody can download Oracle Database 18c On-Premises for Linux ( LINUX.X64_180000_db_home.zip ) Oracle change a little on installation file. OUI does not copy files to Oracle Home You just extract the zip file to Oracle Home directly and OUI only linking binaries. I installed Oracle Database 18c on Linux 7.1. Before installation, I set Oracle environments such as (ORACLE_HOME, ORACLE_BASE). You can add these settings in oracle user .bash_profile. You can watch my little installation video: You can also read all about the new features in the 18c documentation Best Regards Mahir M. Quluzade Oracle ACE
Read more 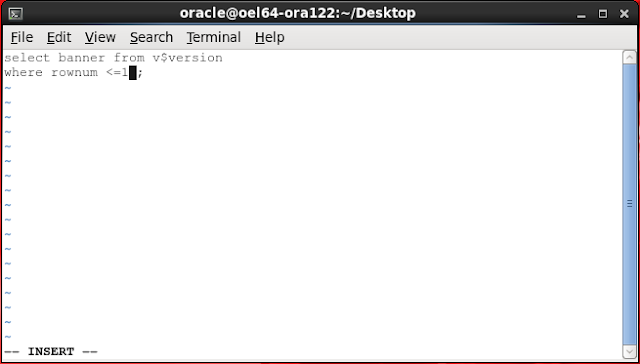 As you know that we can repeat our previous SQL*Plus commands in Windows CMD. But in UNIX based systems not supported command line history of SQL*PLus.  For this reason in UNIX and Linux, we used  rlwrap  utility to see the SQL*Plus command line history and quickly recall previous SQL*Plus commands. With seconds release of Oracle Database 12c coming SQL*Plus  history  command for the history of the command line in Linux. I want to share some example for this command: Before using History we must enable history command as below: SQL> set history on The syntax of HISTORY command as bellow SQL> help history HISTORY ------- Stores, lists, executes, edits of the commands entered during the current SQL*Plus session. HIST[ORY] [N {RUN | EDIT | DEL[ETE]}] | [CLEAR] N is the entry number listed in the history list. Use this number to recall, edit or delete the command. Example: HIST 3 RUN - will run the 3rd entry from the list. HIST[ORY] without any option
Read more 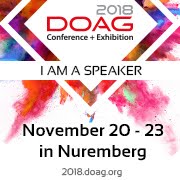 Member and Speaker of 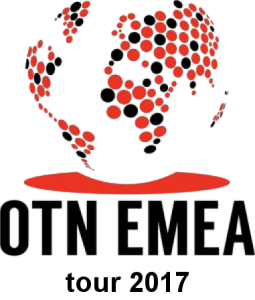